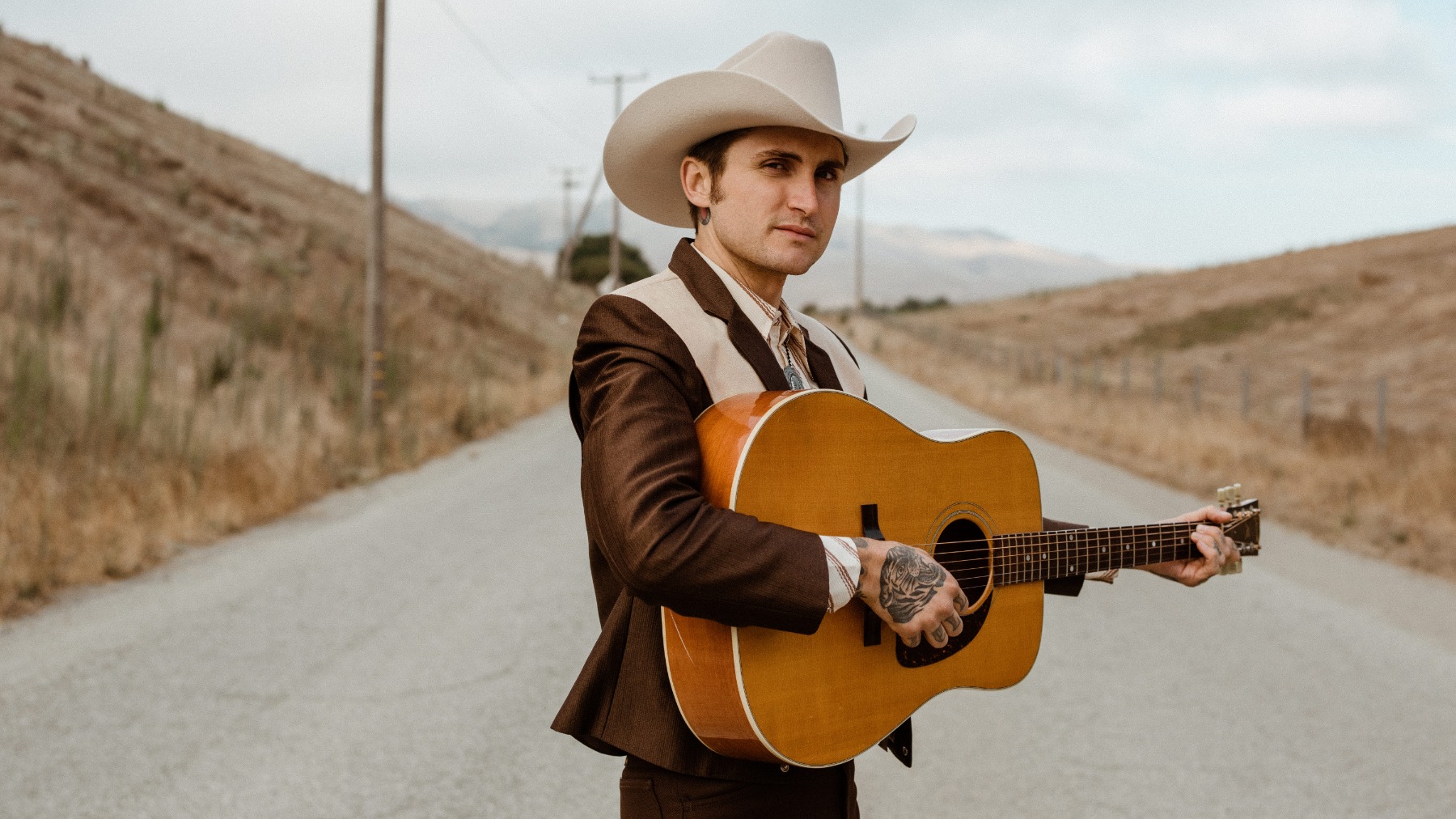 Two years after releasing his self-titled debut — an album whose songs mixed the twang of classic country with greasy, roadhouse-worthy muscle, earning its creator an Ameripolitan Award for Honky Tonk Male along the way — Jesse Daniel is Rollin' On.

Inspired heavily by the California country music that's been emanating from his home state for decades, Rollin' On finds Jesse Daniel in fighting shape, clear-eyed and inspired after overcoming the addictions that haunted his teens and early twenties. It's a record about momentum, redemption, and the realization that the darkness of your past doesn't have to dim the brightness of your present. Co-produced by Grammy-nominated legend Tommy Detamore, Rollin' On is perhaps most importantly a modern update of a timeless sound — a California country record for the 2020s, with one boot planted in the same sonic territory that Buck Owens Merle Haggard once occupied, and the other pointed in a direction that's entirely Daniel's own.

"I'm a nut for the Bakersfield sound," says Daniel, who grew up in a rural mountain town outside of Santa Cruz. "It's really become a part of my songwriting. This record is all about taking a step forward, but it also carries on the tradition of country music made in — and inspired by — California."

Daniel's time in the Golden State wasn't always so inspirational. A punk-rock kid who cut his teeth in the dive bars and local clubs that dot the San Lorenzo Valley, he developed a taste not only for the road, but also for the substances that sometimes come with a life spent onstage. As times got harder, so did the vices. What followed was a period of addiction, arrests, jail time, and rehabilitation centers. Years later, after reclaiming his life by kicking those habits to the curb, Daniel shines a light on his darker days with Rollin' On's autobiographical songs. "Champion," with its Mariachi influences and Tex-Mex twang, tells the story of an old drug-dealing acquaintance of Daniel's, while "Old at Heart" contrasts his youthful appearance with a history of hard living. Elsewhere, Daniel contrasts the bright boot-scootin' bounce, pedal steel guitar, and fiddle riffs that fill "Only Money, Honey" with a frank account of a working musician's financial struggles, then recounts his hometown hell-raising during the lovely, waltzing "Son of the San Lorenzo."

Don't mistake Rollin' On for an album that glorifies Jesse Daniel's outlaw-worthy past, though. Jail time isn't street cred. Instead, Rollin' On finds its frontman reveling in his newfound health and happiness, reflecting on the roadblocks of his past to show just how far he's come. Playing a crucial role in that forward momentum is his musical and romantic partner Jodi Lyford, who co-wrote much of the album's material and sings harmonies throughout.

"I got sober three years ago," Daniel notes, "and since doing so, music has been my one outlet to pour everything into. Because of that, Jodi and I have been doing everything at an obsessive speed. We started writing a lot of songs and began listening to albums by Doug Sahm and Jim Lauderdale. I loved the production and the vibe, and when I'd look up the credits, I kept seeing the name 'Tommy Detamore.' So I reached out to Tommy, and that set everything in motion for the new album."

Daniel and Lyford soon headed down to Texas, where they joined Detamore at his studio in the rural outskirts of San Antonio. There, with cows roaming the pastures outside, they recorded Rollin' On's 12 songs with a band of Texas-based hotshots, while still preserving the California sound that had become so integral to Daniel's music. The results were undeniable: a collection of sharply-written, detail-rich songs whose arrangements evoked — but stopped far short of replicating — the California country classics of years past. Perhaps Daniel simply needed to leave his California stomping grounds before he could truly capture area's influence on his music…much like he needed to embrace sobriety before he could compellingly write about his time spent off-the-wagon.

In every sense, Jesse Daniel has come an immeasurably long way since the years leading up to his 2018 debut. He's cleaned up — for good, this time. He's traveled the country, sharpening his own music while sharing shows with Charley Crockett, Shooter Jennings, and others. Above all else, he's gained a clearer of where he's been and where's he heading. Rollin' On traces that arc, from the bottomed-out lows of Daniel's darker days to the ever-escalating heights of his present. This is his best work to date… and like the album title suggests, he's nowhere close to being finished with the journey.