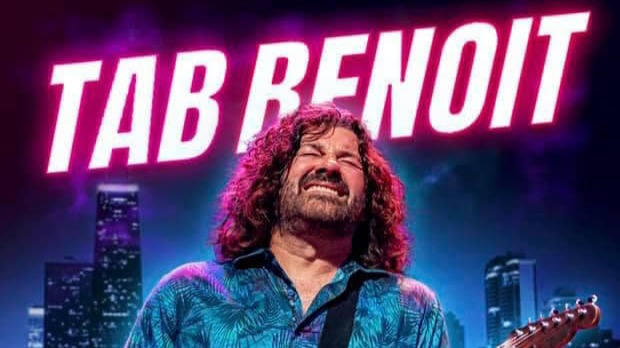 In 1992 Benoit released his first recording Nice and Warm on the Justice Label. The title track became a AAA Radio hit and Benoit’s touring career kicked into high gear. Nice and Warm prompted comparisons to blues guitar heavyweights like Albert King, Albert Collins and even Jimi Hendrix. Tab began playing two-hundred and fifty shows a year, a schedule he has kept up for over twenty years. He recorded four albums for Justice Records before being signed to the Vanguard label, and became Louisiana’s Number One Blues export. Vanguard allowed Tab to produce his own recordings; Tab wanted to record the sound that he was trying to create and in 1999 Vanguard Records released These Blues Are All Mine.

Tab Benoit’s music evolved again after he signed with the Telarc International/Concord Music Group in 2002. He began to strip it down to a three-piece group, where he found more freedom as a guitarist. He was also on a mission in wanting to use his music and his energy to bring attention to Louisiana’s coastal erosion issues. Tab began to spend more time in the Wetlands and it was where he began to write his songs. Wetlands was the title of his first Telac/Concord International release. The record combined many musical styles that are indigenous to Louisiana, while he began to play accordion lines and washboard on guitar. Wetlands was a mile marker that definitively marked Tab’s further musical progression into his own original sound and style.

Hot on the heels of Alastair Greene’s critically acclaimed 2018 release Live From The 805 comes his powerful new album, The New World Blues. Recorded in front of a sold-out hometown crowd in Santa Barbara, California, this album celebrates 20 years of Greene's blues rock power trio with 20 tracks, including original songs drawn from all 5 of his studio records as well as a few choice covers. Alastair Greene has been hailed as one of the best blues rock guitarists of his generation with his band drawing comparisons to Gov’t Mule, ZZ Top, and Cream. THE NEW WORLD BLUES will appeal to fans of Rockin’ Blues, Southern Rock, Jam Bands, and more.
“I went to Tab’s home in Louisiana with a handful of song, and I left with the most stripped down blues-based album I’ve ever made. This is about as unadulterated of a trio record as I can imagine making without it being a bonafide “live album.” It’s raw and gritty and I’m incredibly proud of it. I’d never recorded an entire record without my band before, so this was a journey I made based on my faith in Tab and Corey to interpret and add to what I brought with me. They gave an incredible feel to all of these songs and a groove that only musicians who grew up in the bayou posses. Tab and I wrote a few things together as well, and his instincts and ideas took me to some places I wouldn’t have found on my own. I’m so glad I made this journey and had the faith. We had an absolute blast making this record, and I think you’ll be able to hear that when you listen to it. When I started writing the majority of these songs in early 2019, I had no idea they would take on a whole new and more poignant meaning as time went on.
The New World Blues is here. Much love to you all, Alastair”