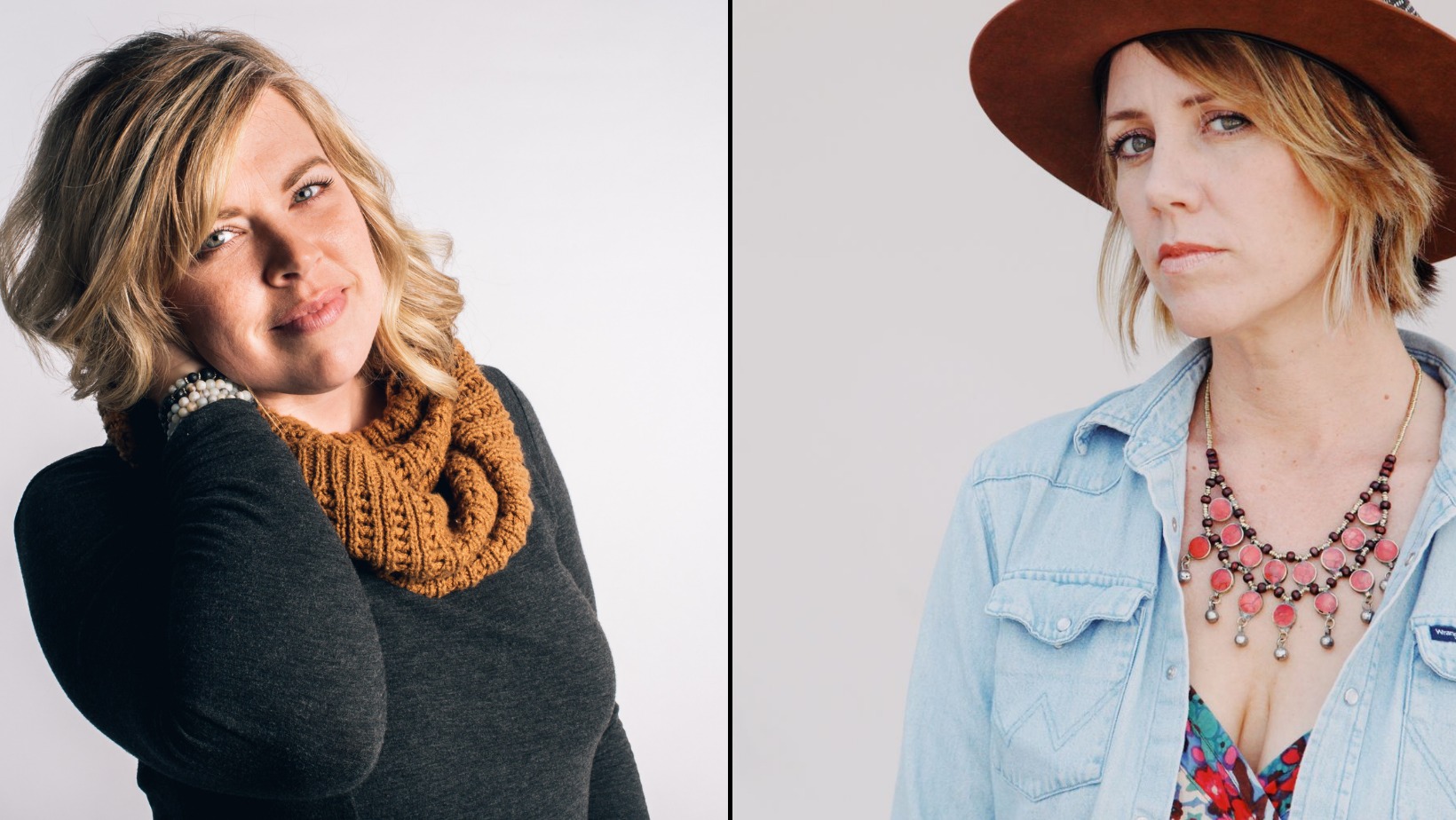 “It’s a weird road we’re on right now––I guess it always has been,” Jamie Lin Wilson says. She’s sitting on her porch in D’Hanis, a tiny town on the Seco Creek in South Texas, not far from San Antonio. She laughs a little, then adds, “But nobody’s life is the same. There is no blueprint.”

Thank goodness for all the lonely paths Jamie’s had to find that no one else has taken. With a voice that slides in and out of notes with easy grace, a sly sense of humor, and lyrics that highlight the details most of us miss, Jamie creates stark vignettes: intimate conversations between friends who might be lovers and lovers who can’t be friends; kids hopping from stone to stone in a graveyard; the way rolling clouds can signal a new season. She lives and works in that sweet spot where folk and country meet––Guy Clark territory.

“It’s unfair that the poets and songwriters are the ones who have the songs about their lives, when maybe that’s not what’s poetic,” Jamie says. “Maybe the moments are the ones happening in everyday farmers’ lives, or to a widow, or a son.” It’s her comfort in and commitment to two distinct worlds––that of the dream-chasing artists and the dirt-under-their-nails realists––that makes Jamie and her songs not just inviting, but cathartically important.

Jamie’s anticipated new record Jumping Over Rocks marks her second full-length solo album, but she’s not the new kid. She cut her teeth fronting and co-fronting beloved bands including the Gougers and the Trishas, winning over listeners and peers across the country. Now, her place as an acclaimed singer-songwriter on her own seems fated, imbued with a singular blend of freshness and road-earned wisdom. “I consider ‘Jumping Over Rocks’ to be a definitive record on myself and my style,” Jamie says. “I hope it’s something people connect with, that it’s familiar to them but also new. I hope that people find it interesting.”

No one covers the spectrum of age and experience quite like Jamie: moving portraits of men, women, and children coping, striving, wondering, and celebrating. Interesting? Undoubtedly. Universal but specific and personal, too. “I studied people around me more for this record than I have in the past,” she says. “I wrote songs from my perspective, from the outside looking in.”

Jamie didn’t pick up a guitar until she was 19. Casual remarks she dropped to her mom and cousin led to a gifting of an acoustic that Christmas. She started attending open mics in College Station, and was immediately welcomed into what was primarily a boys’ club of aspiring pickers and writers that included future fellow Gouger Shayne Walker. “By the end of the summer, I was playing gigs in a band, the Gougers,” she says. “I learned how to play guitar on stage.”

Jamie never looked back. She fell in love and married her college sweetheart, Roy. Together, the two raise their children and make their “weird road” work beautifully. “I’ve been taking kids on the road for eight years, touring constantly, just taking breaks to have babies,” Jamie says.

Jamie recorded Jumping Over Rocks during four days at Arlyn Studios in Austin. A fierce cast of musicians joined her, including Charlie Sexton on guitar, and together, Jamie and the players cut every track live. “You’re hearing my voice with the band––their playing, reacting to my emotions, and my voice reacting to the things they’re playing, all in real time,” Jamie says. “I think that adds to the feeling of these songs.”

The result is a rich collection of story songs delivered over rootsy strings, moody keys, crying steel, and sparse percussion, carried by Jamie’s songbird soprano that can convey tears or laughter with equal panache, sometimes in the same bar. The record kicks off with “Faithful and True,” a vocal showcase that mixes the sorrow of admitting shortcomings with a plea for forgiveness. Written with Jack Ingram, the song sounds like a classic from golden-era Nashville. “In our minds, it was about a relationship and obvious temptation,” Jamie says. “I started playing it at shows, and someone came up after one and said, ‘That song sounds like a prayer.’ I said, ‘Man, I think that’s what it is!’ That’s how I’ve thought of it ever since.”

Gently rolling “The Being Gone” questions the cost and payoff of decisions made, while “Oklahoma Stars,” which Jamie wrote with Turnpike Troubadours’ Evan Felker, pays tribute to those long nights that run together, unremarkably, but in hindsight come together to build a relationship, land, or life. Dreamy “Everybody’s Moving Slow” conjures up images of hazy summers as Jamie delivers a crooning performance worthy of the Rat Pack.

Opening with plaintive strings, “If I Told You” mulls over a painful thought: what if the other person doesn’t really want to know how you feel about them? Smiling through defeat, “Eyes for You” explores the vulnerability love brings. “In a Wink” kicks off with a poignant question: “Did you enjoy the clouds as much as Maggie did this morning? / I don’t know that anybody could,” before cataloguing the gorgeous moments we rush through instead of savor.

"Instant Coffee Blues," originally written by Guy Clark and featuring Ingram as a duet partner, is the sole cover on the record. It's followed by Jamie's own song, "Run," which explores an area Clark mastered, with a stirring debate over how long is too long for a woman to stay.

The album gets its title from standout track “Death and Life,” an epic it took Jamie four years to write. A widow mourning her husband and not quite ready to let go; a son who copes with his father’s death by getting to work with his hands, hammers, nails, and 2x4s: the two true tales became intertwined thematically as Jamie mulled them over. “I realized the song is how people who are still here deal with death,” she says. “It’s life after death, but not heavenly life. It’s how the living deal with death.”

When asked how she hopes listeners react to Jumping Over Rocks, Jamie brings up a hero: John Prine. “On his new album, there is a song that always gets me––‘Summer’s End,’” she says. “Every time I listen to it, I start crying, and I think, ‘I don’t know why I’m crying!’” She laughs her big laugh, which comes often and easily. “I hope something I create can get to somebody in that way. That’s what gets us through––finding common ground with someone else, whether it’s in songs or friendship. It makes you feel better about your own life.”

Courtney Patton is a storyteller.

She’s also a mother, a wife, a producer, a singer, a songwriter, a tour-van driver and a musician- as well as a world-traveler when she’s out on tour throughout the continental U.S., Canada and Europe. But to anyone lucky enough to be sitting in the audience while listening to her expansive Texas twang belt out her version of deep and soulful country music, she’s a storyteller. In a musical era in which clichés and bravado are mistaken for bold noteworthiness, there is something far more brave in peeling back highly personal and emotional open-book songs and delivering them with sensitivity and sentiment. Patton does just that. She is the consummate storyteller in her music. Heartache isn’t just described, it is tangibly felt.

Following her previous solo albums, Triggering a Flood (2013) and So This Is Life (2015), and her acoustic collaborative project with her husband and fellow Texas troubadour Jason Eady, Something Together, (2017), Patton has drawn on true life day-to-day autobiographical life experiences and released her third album, What It’s Like To Fly Alone, earlier this year.

Patton explains the genesis behind the project, “The album is titled after one of its songs, “What It’s Like to Fly Alone”. The title sounds melancholy, but the resolve isn’t. This record is full of songs about people who have had to “fly alone” in some way, whether through grief, loss, life choices, addiction or love. We have to work through our struggles, choose our own destiny, just like the characters in each song. We have to make ourselves happy. No one else can do that for us. I’ve been down in all of those ways, but I chose happiness. In the end, “flying alone” is soaring because you pick your path and you find your way.”

What might be most remarkable, however, is that Patton is doing this all independently. After having Kennedy produce her last album, Patton took the production reins this time around, further cementing this as her most personal work to date. There is no marketing team or music label support. It’s Patton and her spirited passion for the music that has her hands-on over every part of her career.

That makes the fact that What It’s Like To Fly Alone debuted as high at #4 on the i-Tunes country chart and made a mark across four different Billboard album charts (including a Top 20 mark on their Americana Albums Sales chart) all the more remarkable.

But then again, Patton is a storyteller. It only makes sense.